Imagine your family and friends shrinking down to the size of a toy alongside Woody, Jessie, Rex and the rest of your Toy Story pals—all in the so-much-larger-than-life setting of Andy’s backyard.

We think Woody summed it up quite nicely: “You. Are. A. Toy!”

Let’s face it — Toy Story is awesome. Walt Disney World is awesome. So when Disney announced that Toy Story Land is set to open 30th June, 2018, we had one word to say about that: 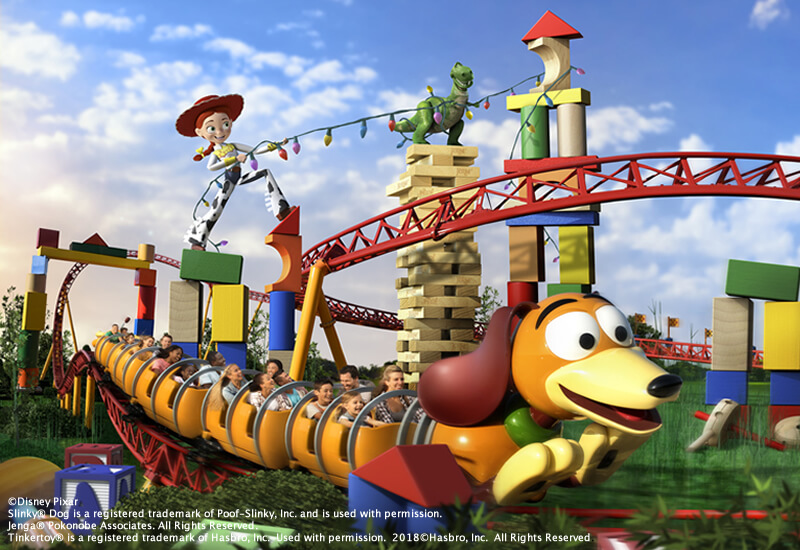 Slinky Dog Dash will be an 18-seat rollercoaster that’s themed as if Andy himself built it with his Mega Coaster Play Kit. It’ll coil, twist, dip, turn and dodge around the new land. You and the family are sure to whoop, scream and yell Slinky’s signature “Golly bob-howdy!” as you weave your way through Andy’s backyard.

You’ll be boarding a toy spaceship with your favourite aliens on Alien Swirling Saucers — a high-energy, modern day teacup ride. Will you be ‘chosen’ by the claw on this ride? You’ll just have to wait and see. We’re definitely “eternally grateful” this ride’s coming to Toy Story Land and Disney’s Hollywood Studios.

You’ll more than likely work up an appetite as you weave your way through Andy’s backyard, so why not stop off to grab a tasty snack and old-fashioned soda float at Woody's Lunch Box. You’ll be surrounded by more of Andy’s favourite toys, including a green army man keeping an eye out for Andy’s return.

We’re seriously excited for Toy Story Land, and can’t wait for it to open this summer (set your calendars for 30th June, Space Rangers). There’ll be plenty more details to come, but for now you can see a model of the park and everything to come at Walt Disney Presents on Mickey Avenue in Disney’s Hollywood Studios. Stay tuned for more info, but one thing we already know… this new land is sure to give everyone a rootinest, tootinest, hootinest time all-round!